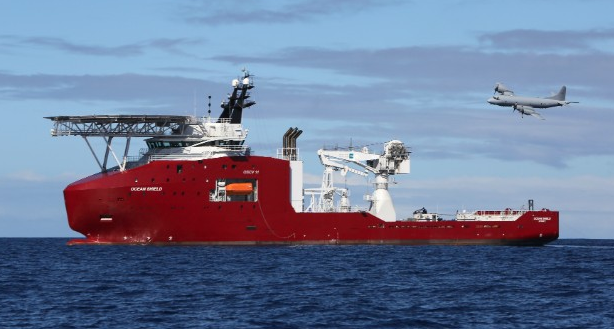 Click Here for a Map from The Washington Post, which puts the depth of the black box signal received in perspective

There were no signs of trouble on the flight for the first hour. At around 1:20 a.m. the co-pilot radioed “All right, good night.”

Things appear to have gone wrong soon after. Not only were the plane communication devices shut down, Flight 370 was soon incredibly off course, according to Malaysian military radar.

The plane did not land in Beijing at 6:30 a.m. as planned. Satellites have traced the plane’s whereabouts to deep in the Indian Ocean, though speculation also surrounds the plane’s mysterious disappearance.

The unknown fate of Flight 370 has captured the attention of people around the globe; headlines have proclaimedthe missing Flight 370 to be the “mystery of the ages.” From conspiracy and alien invasion theories to hijacking, many nations and individuals have decided that they have perfectly sound explanations for the plane’s disappearance.

If the Malaysian government indeed knowsthe names of hijackers and refuses to acknowledge them out of embarrassment (as certain people claim), then this would counter British claims that the flight crash-landed in the southern Indian Ocean.

On March 24, a British satellite company announced that it had determined theplane’s flight pattern using complex physics and mathematical equations.

To date, no one knows for sure how long the plane flew after it changed course and before it crashed… or why it changed course in the first place. The pilot and co-pilot have been under scrutiny, leaving their families not only to grieve, but also to bear the scrutiny of the press.

On Friday April 11, the search for the missing plane, currently being led by Australia’s Joint Agency Coordination Center, and using an unmanned submerssible belonging to the US Navy, was proclaimed to be “going in the right direction.”

The primary goal of the mission is to recover the plane’s “black box,” which issues pings that the submerssible is designed to detect. Recently, however, the submerssible has been experiencing technical difficulties. Once it reached its operating depth limit of three miles, a structural safety mechanism returned it to the surface. It found no evidence of the missing jet.

Signals being detected from beneath the Indian Ocean have led many to believe that the plane will be found; however, the families of those on the flight have somewhat lost hope due to the Malaysian government’s unwillingness to give numerous public updates on the flight.

While Flight 370 has been ever-present in American newspapers, the Malaysian government has taken a more secretive approach and has not been updating the public much as of late.

The fate of flight 370 has struck America in the heart; it is both a tragedy and an incredible mystery.

As the world agenda heats up with disputes over Ukraine, it is important that events such as the disappearance of Flight 370 can unite the world in the common goal of finding answers.