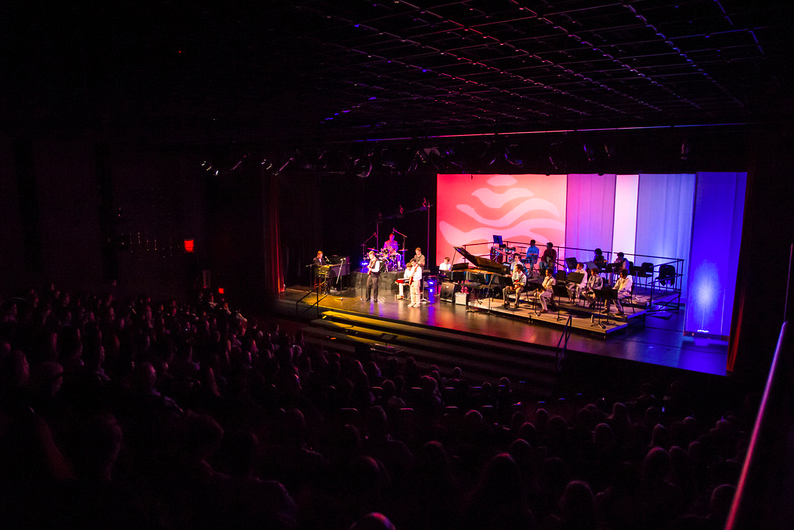 On October 18 at 7:00 P.M., members of Brunswick School’s Blue Notes, Mahertians, Men of Brunswick, Music Improv I, Honors Music Improv A and B, and Jazz Quintet performed in Brunswick’s annual Fall Concert. This year, the concert displayed the immense amount of musical talent present in both Greenwich Academy’s and Brunswick’s student body.

A personal favorite was the opening act, the Music Improv I’s rendition of “Thriller.” After just a few minutes of piercing song, a harsh, growling voice announced the arrival of the night and the monsters hidden behind its veil. Suddenly, a gust of fog engulfed the Music Improv conductor and a member of the Improv class donned an intimidating monster mask.

Their feet engaged in a makeshift round of tug-of-war minus the rope. The effects as a whole were incredible, and compounded with the wonderfully articulated music played by the Improv class, the act as a whole was truly entrancing.

“Although I was really nervous at first since we were performing in front of not only students but also parents, I think that in the end we sounded fantastic,” said Kara Meachem, Group IX guitarist in Music Improv I.

Another standout performance was that of the Jazz Quintet.

“The Jazz Quintet made their debut performance with an outstanding rendition of “It Don’t Mean a Thing If It Ain’t Got That Swing,” a Duke Ellington standard. They went on to play “The Autumn Leaves” and “The Girl From Ipanema,” with excellent work on the piano by Alex Gibbons, Group X,” said Conductor Mr. Paul Raaen.

“I was nervous about performing, but I’m really happy with how the Jazz Quintet did. All five of us really shined, especially on the solos, which came out nicely,” said Nicole Hessler of Group IX.

After the Jazz Quintet, the Men of Brunswick, also known as the M.O.B., took the stage. Henry Haig, Group XII, was one of the soloists for the M.O.B., who performed a beautiful rendition of Billy Joel’s “The Longest Time.”

The most memorable song from the M.O.B. was “The Lion Sleeps Tonight,” featuring beat-boxing by Andrew Basile, Group XI.

“Being able to beat-box for M.O.B. was pretty awesome, to say the least. I didn’t have to memorize a part; it’s basically just improv, which makes my life easier…Overall though, doing the beat-boxing for M.O.B. was really fun, so I hope we do a lot more songs with vocal percussion throughout the year,” Basile said.

For this particular number, the bass section, dubbed the ‘Cult of Bass,’ choreographed the piece, making the crowd laugh with the various imitations of jungle animals throughout the number.

Finally, the Blue Notes wrapped up the night with a flourish of jazz tunes.

“In spite of losing ten graduates from last year, the Blue Notes stepped up to the plate and performed amazingly well on their Duke Ellington signature tune, “Take the ‘A’ Train” with a professional level solo by our president and senior, Henry Hobbs.  We featured sophomore, Markus Lake on “What A Wonderful World” and ended with the Charles Mingus piece, “Boogie, Stop, Shuffle,” which included some excellent drumming by senior Austin Milunovich,” Mr. Raaen said.

As a whole, the Brunswick Fall Concert was an absolute success.

“The Brunswick Fall Concert was one of our best ever, with strong performances by all of our ensembles,” Mr. Raeen said.

Meachem added, “I was really amazed at the talent that was shown and I could tell that everyone had been working so hard to sound so great in such a short amount of time. This concert is such an awesome way to start off a new school year. I definitely will look forward to performing and seeing everyone else’s performances in the near future.”