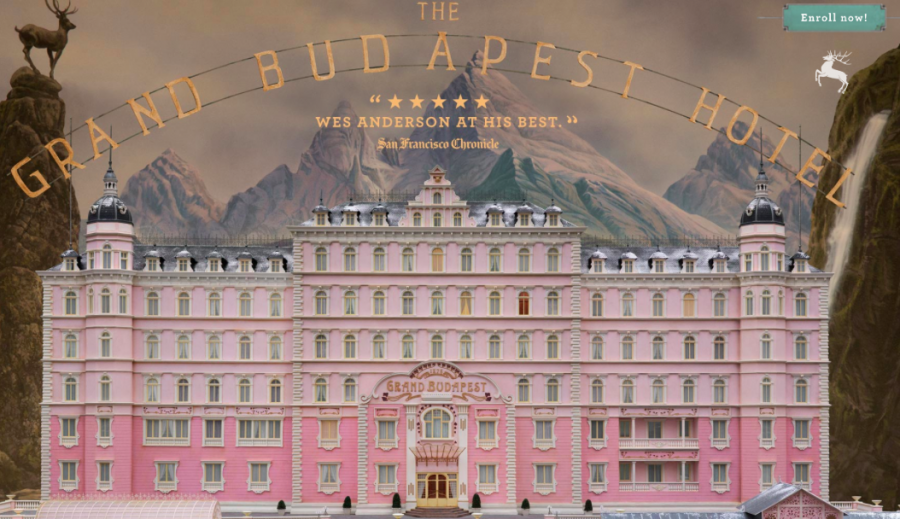 On March 7, Wes Anderson’s much-anticipated movie, The Grand Budapest Hotel came to theatres. As of April 6, the film has made $69.56 million worldwide, and it is currently acclaimed as Anderson’s masterpiece. Filled with coldblooded murder, priceless art, and fabulous accents, this film is a must-see.

The Grand Budapest Hotel, set in the 1930’s, recounts the absurd journey of Monsieur Gustave (played by Ralph Fiennes), a renowned concierge at the Grand Budapest Hotel, and Zero Moustafa (played by F. Murray Abraham), Gustave’s beloved protégée and close friend. They are desperately attempting to clear Gustave’s name; he has been charged with murder and the theft of a priceless painting.

Although misdirected accusation is the driving force in the film, Hotel proves itself to be a grander tale of love and unexpected friendship.

The film is as equally rich in style as in plot. Vibrant colors and a haunting soundtrack entrance the viewer from the opening credits. Anderson’s most critical artistic decision was to place each scene’s central character or object in the dead center of every shot.

This approach, although seemingly monotonous, weaved the scenes together effortlessly while maintaining Anderson’s choppy style within the scenes themselves. He has used this same style in many of his other films, including, most recently, Moonrise Kingdom, and it has become his most defining cinematographic technique.

Indeed Hotel does not fall short in terms of being “Wes-Anderson-esque.” Not only is Anderson’s style recognizable in his subject-centered shots, but we also see it in his bright colors, simple costumes, quirky props, and incredibly intricate sets.

In addition, the film features many cast members that have starred in his previous works, such as actors Jeff Goldblum, Bill Murray, Jason Schwartzman, Owen Wilson, and Bob Balaban. The cast perfectly executes the witty, fast-paced dialogue that characterizes Hotel.

Ralph Fiennes is incredible in his portrayal of the pretentious, flamboyant Monsieur Gustave. His greatest talent is in his timing; each of his lines successfully adds to the hilarity or tension of each scene.

Anderson is successful in creating a beautiful film with enchanting visuals that complements the quirky storyline rather than overshadows it. Overall, I would highly recommend The Grand Budapest Hotel.

Do note, however, that the film is rated R due to some vulgar scenes and explicit language. If you are under seventeen, see the movie with an adult or wait until it comes out on DVD.

Be warned that this incredibly detail-oriented film may even require multiple viewings for full appreciation.